What does slow juicing actually mean?

The secret of making a high quality “living” juice is in the manner in which it is pressed. Slow juicing [invented in Thailand] makes use of low speeds [up to 90 revolutions per minute]not only to press but also to separate the juice from the pulp which guarantees the best taste and reserves more of the vitamins, minerals and enzymes.

Healthier than a juicer.
A traditional juicer uses a sharp grater that turns at very high speeds[ as high as 20,000 revolutions per minute] which causes a lot of friction and heat to be released the result being the loss of a large share of the vitamins, minerals and enzymes and due to the introduction of oxygen into the juice this will quickly begin to oxidize which is recognisable in the colour change between juice and pulp.

Why "living" juice?
A slow juicer uses crushing, grinding and pressing methods for both fruit and vegetables which results in a product which is higher in nutrients. the process is similar to the cold pressing of olives or how humans masticate [chew] food.The result is what we call "living"juice full of essential nutrients and enzymes and as an extra a higher juice yield.

More versatile than a blender.
A blender uses blades turning at high speeds to cut up food and is only really suitable for soft fruits or vegetables and is mainly used to make smoothies,drinks and milk shakes.The use of a blender for hard fruits or vegetables will result in a thick often lumpy mass which includes both the pulp and skin'

A slow juicer can be used for both soft and hard fruit and vegetables and completely separates the juice from the pulp so it is just as easy to make a carrot or a cucumber juice.

Environmentally friendly and healthy.
The juicer presses out every last drop of juice out of fruit and vegetables making it economical in use and it also generates a minimum of waste. 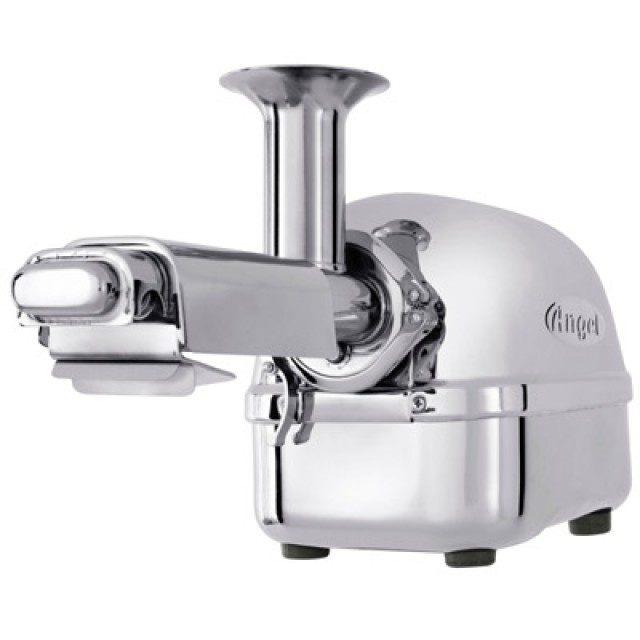 The only press suitable for wheatgrass.
The slow juicer, due to its specific method of extracting juice, is the only machine suitable to produce wheatgrass juice which is a 100% free of pulp. The juicer is also capable of pressing leaf vegetables and herbs such as spinach, lettuce and mint.